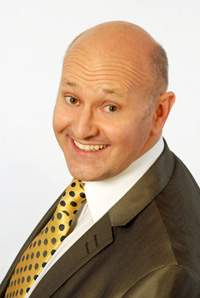 After 10 years fronting top comedy showband “Scholar”, Jed went solo as a comedian and has never looked back.

He is equally at home on stage in cabaret, as he is speaking at sportsmans dinners. He performs at men’s stag shows right through to Officers Mess military shows and everything in between.

In 1999 Jed appeared on SkyT.V’s “THE COMEDIANS” on Granada Plus to great acclaim. He has also appeared on Central T.V’s “JOKER IN THE PACK” with Marti Caine, and “POT OF GOLD” with Des O’Conner, as well as many credits on “RADIO MERSEYSIDE” and BBC “RADIO LANCASHIRE”.

He has worked with the best in entertainment “TheThree Degrees”, “The Drifters”, “Stan Boardman”, “The Supremes”, “Leo Sayer”, “Alexander O’Neill”, “The Real Thing”, “Showaddywaddy”, “Hot Chocolate” and “Frank Carson” all in 2002 alone.

Jed is always in demand with top corporate clients, induding “BritishTelecom”, “Tate and Lyle”, “Lufthansa”, “Royal Bank of Scotland”, “The Labour Party Conference, Blackpool 2002”, and “Allied Dunbar” to name but a few.

Added to that Jed is also in demand with Her Majestys’ armed forces home and abroad, having completed countless tours of Germany and Cyprus during the last two years, he works equally well to young Junior ranks as he does to Sergeants and Officers Messes. He was compere/comedian for the massive 3 day Rhine Army Summer Show, 4 years in a row from 1998 to 2001 performing to 3,000 plus every time.

Jed’s nutty and cheeky style appeals to all, he is deadly quick but never offensive, naughty but not crude, but best of all he’s FUNNY.